The president, in a move that would shatter previous agreements with those countries, accused them of weakening their currencies and hurting American farmers. 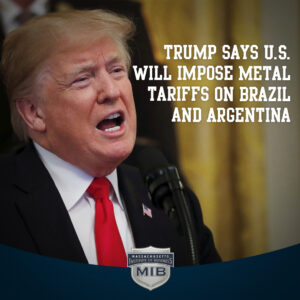 WASHINGTON — President Trump said on Monday that he would impose tariffs on steel and aluminum from Brazil and Argentina, a move that would shatter previous agreements with those countries and widen a global trade war that the president had appeared ready to scale back.

Mr. Trump, in a message on Twitter, accused Brazil and Argentina of manipulating their currencies and hurting American farmers. “Therefore, effective immediately, I will restore the Tariffs on all Steel & Aluminum that is shipped into the U.S. from those countries.”

The United States exempted Brazil, Argentina and other countries from the president’s sweeping metal tariffs in March 2018, with the United States saying it would continue negotiations with those countries to improve their trade terms. In May 2018, the United States announced that it had reached an agreement with Brazil and Argentina that would cap their metal shipments at a specific volume each year.

But the president’s move suggested that neither previous agreements nor political alliances would guarantee insulation from Mr. Trump’s trade wars. Brazil and Argentina are also facing serious economic troubles, but those too were no defense.

The new clash with South America came on the same day that a report from the Office of the United States Trade Representative declared a French tax on technology so onerous that retaliatory tariffs as high as 100 percent on French wines, cheeses and handbags would be justified. The report did not impose such tariffs but cleared the way for Mr. Trump to do so if he chooses.

Mr. Trump’s announcement on steel and aluminum was particularly jarring to Brazil’s conservative populist president, Jair Bolsonaro, who had gone to great lengths to strengthen ties with the Trump administration, with little to show for it.

“Aluminum?” Mr. Bolsonaro asked when reporters presented him with Mr. Trump’s tweet. “If that’s the case, I’ll call Trump. I have an open channel with him.”

“I was in Washington last week, and I talked to a lot of people, and there was no sign whatsoever that there would be any kind of change,” he said.

On Wall Street, stocks dropped by the most since early October, after economic reports suggested that the American economy continues to face significant headwinds. The latest gauge of manufacturing activity from the Institute for Supply Management, a trade group, showed a contraction for the fourth consecutive month in November. The S&P 500 index closed down 0.9 percent. Real estate, industrial and technology companies suffered the steepest drops.

It is unclear what prompted Mr. Trump to reverse previous agreements. But last week the Brazilian currency, the real, fell to a record low against the dollar after the country’s economic minister signaled that he was not concerned about exchange-rate fluctuations.

Argentina’s peso has weakened with the country in the midst of an economic crisis.

Economists and government officials have rejected the idea that Brazil and Argentina are intentionally manipulating their currencies. But currency movements have made Brazilian and Argentine goods cheaper to purchase abroad, a dynamic that is particularly important for the agricultural sector and the United States’ trade war with China.

China is a major purchaser of American pork, soybeans and other agricultural goods. As the United States and China have slapped tariffs on each other’s products in a more than yearlong trade war, China has shifted to purchasing products from Brazil and Argentina instead, a move that has rankled Mr. Trump and other American officials.

As of Monday evening, the White House had not issued any formal notice that would put tariffs on Brazil and Argentina into effect.

If they are imposed, the tariffs stand to do considerable damage to South America’s two biggest economies as Argentina is in recession and Brazil confronts high unemployment and anemic growth.

Mr. Sica, of Argentina, scoffed at the claim that Brazil and Argentina have been deliberately devaluing their currencies.

“Our currency has a flexible exchange rate and adapts itself to global changes,” he said.

Brad Setser, a senior fellow for international economics at the Council on Foreign Relations, said neither Brazil nor Argentina was manipulating its currency. In fact, both countries had been selling foreign exchange reserves to prop the value of their currencies up. He added that Argentina was in a “full blown” economic crisis and was close to running out of such foreign exchange.

The announcement on Monday was the latest escalation in Mr. Trump’s global trade war. Mr. Trump has also threatened new tariffs on products from China, Mexico, the European Union, Vietnam and elsewhere.

With next year’s election approaching, the Trump administration has appeared to be working toward a resolution on several of these fronts. It reached an agreement to lift metal tariffs on Canada and Mexico and declined to impose devastating car tariffs on the European Union. It has been trying to seal a first-phase trade deal with China, though the two sides are continuing to grapple over terms. And the administration has been pushing for Congress to approve its revision of the North American Free Trade Agreement, which would check off a major campaign promise for Mr. Trump.

But the tariffs on Brazil and Argentina suggest that Mr. Trump has not abandoned his confrontational approach.

On Monday, he said on Twitter that American stock markets “are up as much as 21%” since he announced the metal tariffs on March 1, 2018, and that the United States was taking in “massive amounts of money” in tariff revenue.

Any new tariffs would likely face legal challenges, however.

The president imposed the metal tariffs to stop a flood of imported steel and aluminum that his administration has claimed threatens American producers and thus American national security. The idea has been disputed, with several countries bringing cases against the United States at the World Trade Organization.

And in a recent decision, the United States Court of International Trade, a federal court, ruled that Mr. Trump could not raise tariffs on steel exports from Turkey, because a 180-day deadline set for that decision had already elapsed.

Jennifer Hillman, a senior fellow for trade and international political economy at the Council on Foreign Relations, said the law that the president had used to issue the tariffs, Section 232 of the Trade Expansion Act of 1962, did not give him the authority to alter tariffs outside of certain time limits.

“Trump cannot legally convert the current quotas to tariffs,” she said. “Changing a quota to tariff more than a year and a half after the original action is outside those limits.”

Supporters of Mr. Trump’s tariffs say they have provided some protection against cheaper metals imported from abroad.

“Congress and trade experts have ignored exchange rate moves in crafting trade policies for too long,” said Michael Stumo, the chief executive of the Coalition for a Prosperous America, a trade group that supports the metal tariffs. “The president’s action is a next step, after declaring China a currency manipulator earlier this year, to connect exchange rates and trade.”

But other economic factors have continued to weigh on the steel industry, including China’s large-scale production and a weakening manufacturing sector in the United States and abroad.

The tariffs have also angered American manufacturers of automobiles, machinery, food packaging and other products, who must pay more for the metal they purchase.

The Brazil Steel Institute, which represents the interests of steel exporters, said in a statement that it found the new tariffs “perplexing” and warned that it would harm companies in both countries.

“The decision will end up harming the American steel producing companies, which need the semifinished products exported by Brazil to operate its plants,” the institute said.